Spore category. Produced by mycelia of mushrooms, many yeast-like fungi, other microfungi. 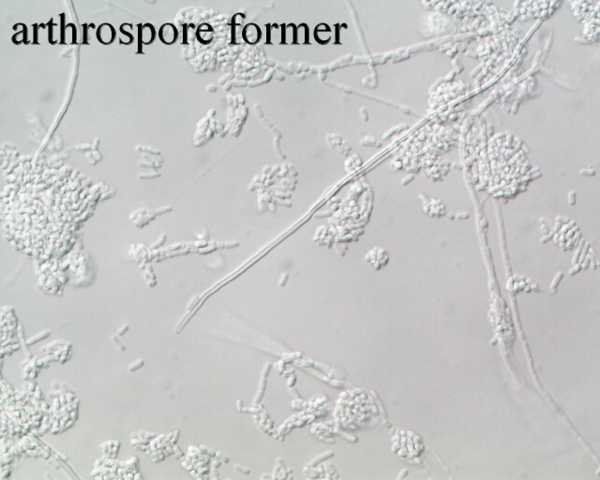 Arthrospores are a very primitive spore type, formed by the breaking up or disarticulation of fungal mycelia. Many yeast-like fungi such as the genera Geotricum and Trichosporon form arthrospores. These organisms require a series of biochemical tests for definitive identification. Many microfungi (such as the dermatophytes) form more than one kind of spore, including arthrospores, as well as spores that are morphologically distinct. Other microfungi form only arthrospores, but with mechanisms or other structural morphologies that are unique. Most of the basidiomycetes (mushrooms) form arthrospores as part of their mycelial phase; these arthrospores are not distinctive and are for the most part not an aid in identification. Colonies isolated on Andersen samples with aerial mycelia and many arthrospores are most probably the result of germinating basidiospores from mushrooms.